Interview Naomi Velissariou: "We try to autotune pain itself" 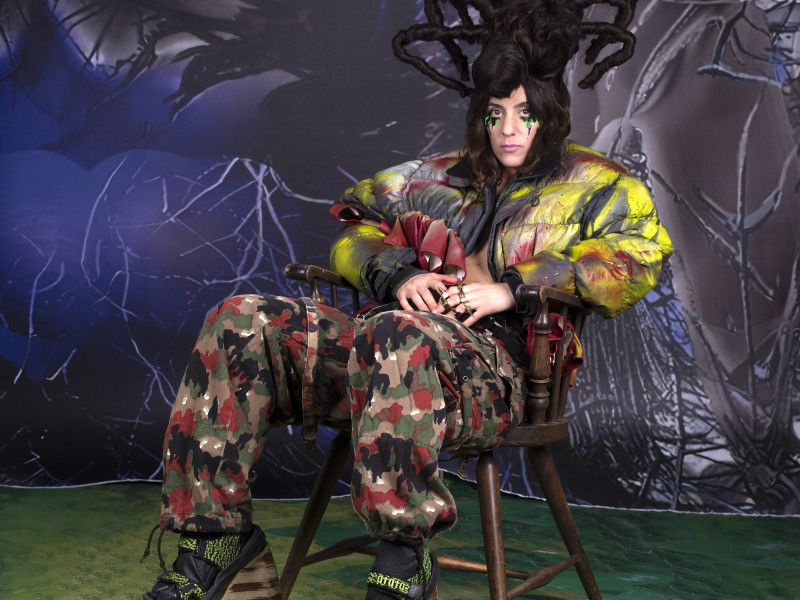 In The HM Concert Naomi Velissariou and her ‘pop-up band’ Permanent Destruction will seductively drag you into the dark undercurrents of our time. Self-destruction, sexism, misogyny, feminist terrorism; she confronts, excites and conjures in a sexy, melodramatic performance full of love, self-hatred, poetic lyricism and bashing beats. With music by sound producer Joost Maaskant, lyrics inspired by and based on the work of dramatist Heiner Müller and visuals created by Jan Hoek.

Hey Joost and Naomi! How did you two meet each other?
Joost: We both went to Toneelacademie Maastricht. We always saw each other there, but never spoke back then.
Naomi: In 2017, while I was doing research at Frascati on the combination of music and theatre text, I bumped into Joost again. I wanted to record a concept album, based on the works of the English playwright Sarah Kane. I worked together with Sjoerd Bruil from Millionaire, Mauro Pawlowski, Ramon Slager from Zwart Licht and of course: Joost Maaskant. Musicians and producers with a completely different musical background. The funny thing is that I worked with everyone else for 2 days to create a track – which was a really short time already -but with Joost, I made a track in 5 minutes.
Joost: Yeah there was this super fast chemistry between us. Soundwise, but also in intuition.
Naomi: I asked him to marry me right after. And he said yes. So now we’re artistically married, a permanent destructive marriage that is.

And what do you think is the key to a healthy and successful artistic working relationship?
Joost: Being very, bluntly honest.

What does your work process look like then?
Naomi: First I do dramaturgical research for a month and write everything down to form a concept. After that Joost and I start recording the demo. After 4 months, when the album is finished, I start brainstorming with a visual artist and shooting the material for the visuals. The development of the visuals takes about 3 months. hen the film is ready, the actual rehearsal period begins. In collaboration with a wonderful team, I add lights, actors, costumes and choreography. All together it takes about 9 months to conceive a Permanent Destruction show. Just like a baby!

So you are basically stuck behind a laptop most of the time to make this whole performance come to life?
Naomi: Definitely. I find it surprising that people think otherwise. Theatre is not just about standing on a stage and starting to improvise, or at least me it isn’t. It takes me months to prepare everything and during those months I also keep on fundraising, selling shows, developing marketing plans and having preproduction meetings. The preparation takes so much time that the actual rehearsing and performing feels like a vacation after that (haha).

What do you find most scary about doing these performances?
Naomi: For me, the scariest and the most fun part is that I’m not an actual singer. In fact, I cannot sing at all. I make theatre shows in which I pretend to be a tainted, international pop star. What I was really surprised about in our first show, is how much audiences are conditioned by the pop idiom. They automatically idolize anyone who imitates this idiom. When you welcome people night after night by throwing a “good evening Holland / Belgium” into theatre sized audiences, they seem to forget that you’re not a celebrity and start to scream. At least, that’s what happens if it’s not a night with only 30 people in the audience. Then it gets extremely embarrassing to do this performance . We once did it for two people during a try-out at the Oerol festival, and that was so embarrassing, that it became magical in the end.
Joost: I want my music to be soulful, and to get there, that’s the big job. The music has to carry the content but also has to be interesting to listen to and contain some kind of soul. You should hear what’s going on inside our minds. For me that’s the biggest challenge, to obtain that.

What fascinates you about the Heiner Müller’s work?
Naomi: The HM concert is part two of a trilogy. Sarah Kane and Heiner Müller were very popular playwrights back in the nineties. They both sketched a dystopian image of the future, their work has a big “grunge” quality to it, I think. Just like the music of Nirvana. The nineties are very retro right now; the fluorescent colours, the smileys and the sounds. But the “here we are now, entertain us” pain vibe is no longer fashionable since Instagram. It’s just not as brandable as the “sexy emancipation” of types like Taylor Swift, Kim Kardashian or Beyoncé. With Permanent Destruction, we try to make the visceral pain of the nineties retro as well.

So you’re making pain hip again?
Naomi: Within the form of the theatrical concert, we play around with the concept of pain, as it is presented in the work of Kane and Müller. Decompiling their texts and blending them with musical genres such as punk, trap and speedcore, we make these writers into our prophets of pre-internet pain. Of course, pain is a concept of all times. But in the nineties, it was really part of popular music genres like grunge and now with auto-tune, everything became horny and superficial. We try to auto-tune pain itself, turn it into a party so that you don’t have to hide it but can dance it away.
Joost: Back in the Ancient Greek days you also had like three tragedies performed in a row, but it had more of a party allure. People were really committed to going to these plays and then they ate and drank all day. It was more like a festival. We’re also trying to make a festival-like, concert melodrama. And at our party you can have a drink and listen to Sarah Kane and Heiner Müller texts.

You’re also active in the Instagram world. Do you feel like it’s an online amusement park?
Naomi: It’s dangerous to have an Instagram account and say something critical about it at the same time. We need Instagram to engage an audience. We try to use this medium in the same way we approach all our marketing: conscious, playful and with a funny twist. Our biggest marketing project until now was our merchandise. We sell clothing with prints saying “doom between my legs” and “I can’t fuck”. This year we are going to ask influencers to help us promote it. So it looks really hip but it is a fundamentally sad message, no? Anyways, promoting sad-clothes-selfies feels better than laying on your sofa depressed and reposting pictures of your award show two years ago (haha).

If the music is so moving, do you mind people descending into their own thoughts while watching you perform? Are you okay with the fact a message could get blurred or lost?
Naomi: I actually think it’s the power of the concept, if I may say so. You can attend a concert and enjoy the music, drink beer and have fun. Or watch a weird adaptation of repertoire, with very expensive visual arts. Some people pick up the content but don’t know the pop idiom that we are imitating, other people enjoy the music and don’t care what the show is actually about. As a director, you can organize focus and live response, but you cannot direct how people leave the room.

I guess you never really know how the audience felt at the end of the play?
Our tradition is to have a mini rave after the show. Because we felt many people needed some kind of release. So we started raving together with them afterwards. Some of those raves were very special to us. At the premiere we’ll have a mini rave with a Subbacultcha DJ, I believe.

Are you also joining for the after party in the bus?
The bus is leaving quite soon, right? So we’re gonna rave first because it’s the ending of 9 months work for us. I wish the bus could stay till the morning and we’d all return to Amsterdam hungover. We’ll see what happens that night, in any case, we’re very happy with this bus!

Something else, you coined the term ‘feminist terrorism’. What is it all about?
I take the oeuvre of a writer and transform it through a few themes that I believe are essential to their work and relevant for our times. In Müllers works it’s the battle of the sexes I focus on. The HM Concert is a feminist death cult ceremony. Since #metoo, I’ve been feeling some irrational, aggressive sentiments, that I cannot explain to myself. It’s as if the feeling grew beyond its purpose. There is an official term for this: ressentiment. The definition is “a psychological state resulting from suppressed feelings of envy and hatred which cannot be satisfied”. This feeling is both psychological and political. In my show I try to make the ultimate aggressive feminist statement, I do the one deed that could for once and for all end all feelings of being oppressed. Knowing that the only thing that’s permanent is destruction, this cannot really end well, can it? Thank god there’s the mini-rave afterwards (haha).

And who are the most important people of the past century, according to you?
Naomi: Drake, James Blake, JPEG maffia, Jacques Brel, Bjork, SOPHIE, Stromae, Frank Ocean, Diamanda Galas, Jorgos Lanthimos, Paolo Sorrentino, Xavier Dolan, Tracey Emin, Susan Sontag, aah too many to mention.
Joost: Nirvana, Flying Lotus, Bas Jan Ader, Mark Rothko, Portishead, we could name so many.

Wanna see Naomi and Joost performing live? Join us at the premiere with the Permanent Destruction bus. Free for Subbacultcha members.
The performance is a co-production between Naomi Velissariou and Theater Utrecht. Front row is the ongoing cultural experiment by We Are Public.